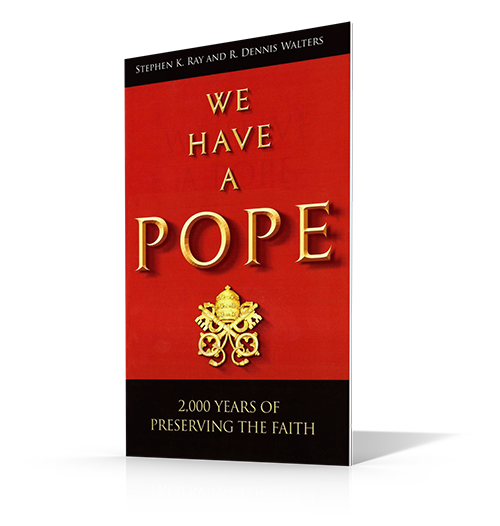 We Have a Pope: 2,000 Years of Preserving the Faith

As the head of the Catholic Church, the pope is the leader of the faithful. But for non-Catholics the papacy is one of the most difficult aspects of Catholicism to accept.

From often misunderstood concepts such as papal infallibility to the unbroken and irrefutable connection between Peter and today's Pope, We Have A Pope will provide you with the answers to common difficulties.

You'll find detailed and fascinating explanations of the evolution of papal responsibilities, the history of the office, and the vital importance of the Holy Father throughout 2,000 years of history - and especially in today's world.

First, let me say that I really enjoy Steve Ray's apologetics books and videos.  This booklet, We Have a Pope: 2000 Years of Preserving the Faith, is a great example of what I like best about Ray's work:  he has a quirky sense of humor and a way with words that is only excelled by his deep love and understanding of the Catholic faith.

We Have a Pope is a short booklet ... only 32 pages ... but each page gives a clear and concise (often with just a touch of humor) explanation for the question asked.  The topics discussed include:

These questions are all clearly answered, making this a great booklet to have on hand for answering Catholics and non-Catholics alike when they question the papacy.  Ray (and his co-writer, R. Dennis Walters) quotes scripture extensively to prove their arguments when answering the above questions.  It's hard to refute scripture and Ray is a master as using the Bible to elucidate Catholic truths.

This is one of those booklets that should be in every home and Catholic classroom.  Many people (both Catholic and non-) just really don't understand who the Pope is and why we must follow his teachings on faith and morals, why we have a Pope at all.

_Staring at the History of the Church_

In the introduction to this brief booklet by Steven K. Ray and R. Dennis Walters, the story is told of a Christian woman who visited the Vatican and Saint Peter_s Basilica as a tourist decades ago. While standing among the crowd of spectators she witnessed the grand entrance of the pope, carried aloft on a throne to greet the people. Being Protestant, she had never attached any importance to the Bishop of Rome and rejected the Catholic notion of papal supremacy. But at that moment, when she caught a fleeting glimpse of Peter_s successor, the head of the Catholic Church on earth, she felt goose bumps on her arms and a rush of unexpected excitement. As she craned her neck to get a quick view of the pontiff, she felt as if she were _staring at the history of the Church._ And then he was gone.

That moment in one woman_s life encapsulates the essence of this short work entitled We Have a Pope. Not intended as an exhaustive or thorough examination of the papacy, this 31 page text offers us a fleeting glimpse of Peter_s Successor as it explains how the Holy Father fits into the Church that Christ established. Reading this booklet is like stopping briefly to gawk in curiosity (like a spectator in Rome), but to come away from that experience knowing that we saw something quite more than we had expected.

Within these pages we find, Scriptural passages (especially the giving of the _keys__ to Peter in Matthew 16, and Jesus_ ordering of Peter to _feed my lambs_ at the end of John_s Gospel) all of which support the Catholic teaching of Peter_s primacy and the special authority granted to him by Christ. We also find a few select quotes from the Fathers of the Church that support Apostolic Succession, Peter_s presence in Rome, and the unique role of Rome and its Bishop in the governance of the Church. History, the Bible, and the witness of many Christians come together in a short space to trace the outline of Catholic doctrine concerning the pope as Peter_s heir.

If I had one criticism of We Have a Pope it would be that some issues are passed over a little too quickly or without enough detail to set the record straight from an apologetics standpoint. For instance, the two forms of the Greek word _rock_ used in Matthew 16:18 _ petros for Peter_s name, and petra used in the same passage _ are often cited by Protestants as proof that Jesus did not call Peter the _rock_ on which the Church is built, since He used two different Greek words. Without directly addressing the Protestant side of the debate, the authors do explain that the actual language spoken by Jesus was most likely Aramaic (not Greek) and therefore kepha was used for _rock_ in both instances. So the discrepancy in the naming of Peter is eliminated. Overall, the matter is handled effectively without delving too far into the technicalities of Greek linguistics or Protestant polemics. Also the authors do a good job of building the case for Peter as the _rock_ by explaining the significance of name-changes in a Biblical context, and the use of Kepha (or Cephas) as Peter_s name elsewhere in the New Testament.

My criticism is only minor. Obviously the shortened format of this book does not lend itself to protracted explanations, or to a full treatment of every aspect of the papacy. In such limited space it is difficult to tackle every challenge to Catholic doctrine. More lengthy works on the papacy and Petrine authority do explore fully the Protestant challenges and defend Catholic belief in a more thorough manner. Steven Ray, one of the authors of We Have a Pope, penned just such a book entitled Upon This Rock, which includes ample footnotes and bibliographical information for anyone interested in further study. The important point and main goal of this smaller tract is to give the reader a quick glimpse of the pope (as a curious bystander might have while seeing the sights of Rome) and in doing so spark a longing for more. Once we have caught ourselves _staring at the history of the Church,_ we can seek out other writings that give us a better view.

(Note: This is a great booklet to have as an apologetics source to lend out to non-Catholics who are inquiring about Catholic doctrine on the papacy. It may not answer all of their questions, but it gives a good summary and a jumping-off point for further discussion. Also the price is right for buying multiple copies so that sharing is made easier.)