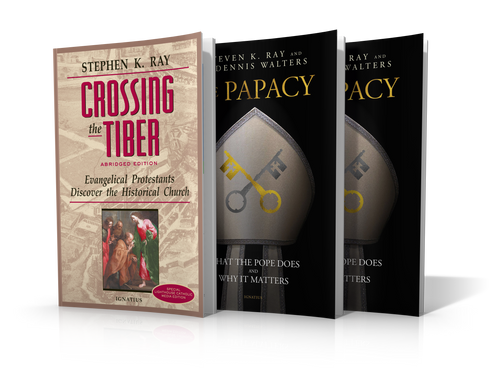 The Papacy and Crossing the Tiber Bundle!

For a limited time, get two copies of The Papacy: What the Pope Does and Why It Matters and one copy of Crossing the Tiber: Evangelical Protestants Discover the Biblical Church for the price of one!

Crossing the Tiber This book outlines the reasons for Steve's conversion from a devout Baptist to a fervent Catholic. Steve relates how he overcame his hostility to the Catholic Church by serious Bible study and vast research into the writings of the early Church Fathers. In addition to a moving account of their Steve and his wife Janet's conversion that caused the entire family to “cross the Tiber” to Rome, he offers an in-depth treatment of Baptism and the Eucharist in Scripture and the ancient Churc