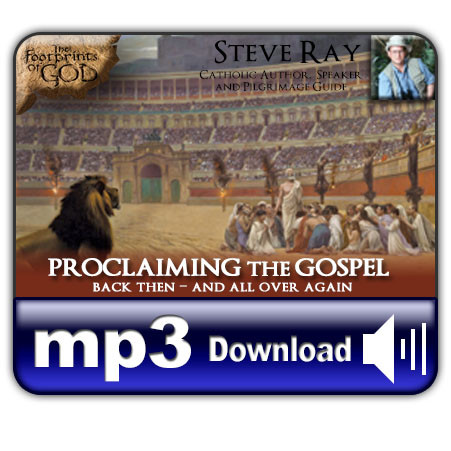 MP3 - Proclaiming the Gospel: Back Then & All Over Again

Pagans worshiped many gods (polytheism). Christians were allowed to worship Jesus along with the pagan gods as one among equals. Caesar too claimed divinity. But Christians said, "No!"Â They would bow only to the one true God and refused to burn incense to pagan deities.

Because of their unflagging principals they became persecuted outcasts, treated with malice. Sound familiar?

With his usual enthusiasm, Steve explains how our culture is falling back into a new paganism (we call it pluralism) with the West worshiping at the alters of comfort, affluence and self indulgence.

He’ll get your heart pumping as he challenges you to make a deadly choice to stay faithful or to keep your head and lose your soul.

Audio Sample 1: We have many powerful tools to proclaim the Gospel, like the internet and Catholic Radio. However, we are also at a disadvantage compared to the early christians because many people already know everything they think they want to know about Jesus and the Chruch.

Audio Sample 2: Christianity is true and all other philosophies and religious fall short. So why are we so afraid to share our faith in public. Steve encounters all sorts of people during his travels including this story about an atheist who noticed his crucifix.

Audio Sample 3: Listen to the fun story of how Steve's son used the circling water in a swimming pool to teach his kids how to fight against the culture.

Audio Sample 4: The pagan Romans' gods gave no hope to the people, but the Christians knew about the resurrection and that it profited them nothing to gain the world and lose their soul. Because of this they died with honor, nobility and great hope...they converted many pagans just through their deaths.

Audio Sample 5: Confirmation is a powerful sacrament, how can we present it to our children in a way that will help them feel the excitement of what is really happening in this sacrament. Steve got this boy's attention with a sword.