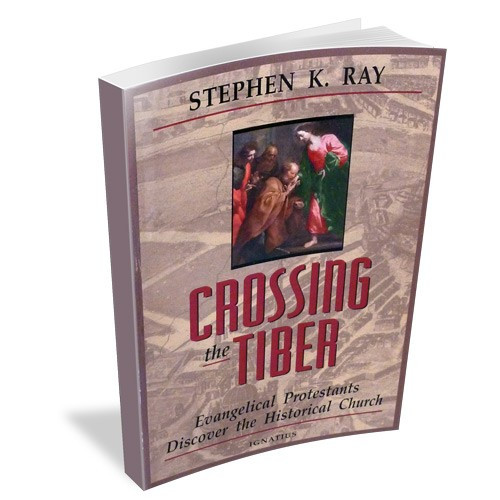 Stephen K. Ray was raised in a devout, loving Baptist family. His father was a deacon and led Bible studies. Steve himself was very involved in the Baptist Church as a teacher of Biblical studies, and he lectured on a wide range of topics. When a best friend, an Evangelical pastor, converted to the Catholic Church, Steve and his wife Janet decided to investigate the claims of the Catholic Church, taking a thrilling journey back in time that would eventually change their lives forever. After hundreds of hours studying the Bible and the writings of the early Church, they were convinced that the Roman Catholic Church was the Church founded by Christ, and they were received into the Church on Pentecost Sunday in 1994.

In this book, with no rancor toward his Evangelical roots, Ray shares with the reader their exhilarating discoveries. He traces their initial hostility toward the Catholic Church, their passionate research and the discovery of the historical Church, quietly waiting to be rediscovered. He convincingly lays out the issues that carried them over the "uncrossable chasm" info the Catholic Church. Thoroughly documented with over 400 footnotes, Crossing the Tiber contains an extensive compilation of biblical and patristic quotations and commentary on the issues of Baptism and the Eucharist, as well as a thorough analysis of Sola Scriptura and Tradition.

Ray takes you back to the first four centuries of the Church to discover the early Church-was it like today's Protestantism in theology and practice, or was it Catholic? Discover the unbiblical and unhistorical nature of the "Bible Only" argument. Discover the uniform consistency of the Catholic teaching on Baptism and the Eucharist from Scriptures and the Church Fathers. Take a delightful journey with Steve and Janet Ray as they "cross the Tiber" to join the throngs who have rejoiced in the beauty of the Catholic Church for over two thousand years.

EXCERPTS AND TABLE OF CONTENTS:

On Joining the Catholic Church : "For the Protestant, the major obstacle, overshadowing all others, is the issue of authority. He has the Bible alone and can be his own authority. The hierarchical structure of the Catholic Church is more than an Evangelical can tolerate. Evangelical friends have chided us, 'So, you're crossing the Tiber to submit to the yoke of Rome.'
Though the question was sarcastically asked, the answer, quite frankly, is 'Yes, we are.' For us it was a matter of Scripture, history, and objective truth, an educated submission to Christ in his Church--the glorious Body of Christ. Authority doesn't sit well with the twentieth-century mind-set. It smacks of weakness, slavery, and subservience, especially in a society that values unlimited personal freedom as a birthright. Submission to authority can come about in one of two ways: first, as an act of insecure subservience or groveling, which is brought about by a lack of nerve, a reluctance to be responsible for one's own choices and acts or an unwillingness or inability to act independently.
The second reason for submission to authority is the exact opposite of the first and a seerming paradox--it is an act of decisive independence. The strong, secure, and independent person can, as a supreme act of his independence, accept the authority of one who is worthy to exercise it. Consider the great warriors and knights of old, who willingly, and of their own accord, swore allegiance and obedience to a king who was by his very character and title deserving of honor and submission. Submission to Christ in his Church is not an act of blindness, weakness, conformity, or groveling. It is rather an act of courage, intelligence, and decisiveness--a willing choice made from the very essence of emancipation.
We realized that the Catholic Church was God's authority, his Kingdom represented visibly in space and time. Once we recognized the truth and historical solidity of the Church's claims, we had no choice but gladly to swear allegiance and pledge our fealty."

On the Eucharist : "There is no need to take great pains with the modern views [of the Eucharist], for they are known to all. There is no similarity between the present-day Evangelical view and that of the early Church with her apostolic tradition. Evangelical Protestants have to accept a certain ungrounded supposition: that the true Church ran off the rails immediately after the apostles and disappeared for sixteen centuries until Luther came along to set it all aright again.
This takes more faith than is required simply to believe the early Church. Did Christ abandon his Church for the first sixteen centuries? I would consider such a supposition very untenable, dangerous, and misinformed. With the present-day Protestant Evangelical view of the Eucharist as merely symbolic, the sacrament has lost its meaning and importance. This is clearly demonstrated by the relative indifference with which it is treated.
Most churches partake of the Lord's Supper once a month, or in many cases only four times a year, and even then it is only tacked on as an appendage to the regular worship service. How far these groups have removed themselves from continuity with the early Fathers! The ancient Church of the apostles would have had a universal opinion, such as Ignatius of Antioch had, of those who had 'Perverted notions contrary to the grace of Christ and the will of God!' The Church of the early apostles would have considered this negative view a blatant heresy that, in their understanding, would place one outside the grace of Christ and outside his Church, the ark.
Where can you go to celebrate the Eucharist today the way it has been celebrated since Pentecost? The Roman Catholic Church traces her succession back, in an unbroken line, to the first century, the apostles, and Jesus. She still holds tenaciously to the customs and sacramental vitality that the early Church taught, practiced, and died for."

On Baptism : "One last comment, even though it will be discussed in more detail later: there is no attempt here to pit baptism against faith, or belief against baptism. Things are rarely that simple. Faith and baptism are two sides of the same coin. Are we saved by faith or by baptism? Are we saved by believing or by the Spirit?
These are false dichotomies that should have no place in our thinking. How does one receive salvation, justification, new birth, and eternal life? By believing in Christ (Jn 3: 16; Acts 16:31)? By repentance (Acts 2:38; 2 Pet 3-.9)? By baptism (Jn 3:5; 1 Pet 3:21; Titus 3:5)? By the work of the Spirit (Jn 3:5; 2 Cor 3:6)? By declaring with our mouths (Lk 12:8; Rom 10:9)? By coming to a knowledge of the truth (1 Tim 2:4; Heb 10:26)? By works (Rom 2:6, 7; James 2:24)? By grace (Acts 15:11; Eph 2:8)? By his blood (Rom 5:9; Heb 9:22)? By his righteousness (Rom 5:17; 2 Pet 1:1)? By his Cross (Eph 2: 16; Col 2:14)?
Can we cut any one of these out of the list and proclaim it alone as the means of salvation? Can we be saved without faith? without God's grace? without repentance? without baptism? without the Spirit? These are all involved and necessary; not one of them can be dismissed as a means of obtaining eternal life. Neither can one be emphasized to the exclusion of another.
They are all involved in salvation and entry into the Church. The Catholic Church does not divide these various elements of salvation up, overemphasizing some while ignoring others; rather, she holds them all in their fullness."

Concluding Paragraphs : "Catholicism is the voice of sanity; as Chesterton said, 'Catholicism is the only thing that saves a man from the degrading slavery of being a child of his time.' Janet and I happily rest in the sanity, peace, truth, and salvation of the Catholic faith. We stand in visible unity and a most profound historical continuity with the Lord Jesus, the apostles, the Fathers, the martyrs, the saints, and the whole, glorious Catholic Church. Here I stand; I can do no other! We are not the first to cross the Tiber, we won't be the last--we are in good company!"

Part One: Crossing the Tiber

The Foundations of Our Evangelicalism     23

Our Evangelical Foundations Begin to Crumble     29

Sola Scriptura and Private Interpretation of the Bible Brings Disunity     42

Scripture, Tradition, and the Canon of Scripture     49

Our Struggle with Other _Catholic Issues_     58

We Begin to Discover the One Holy, Catholic, and Apostolic Church     64

Should We Accept Church Authority?     68

The Next Important Crossroads: Catholic or Orthodox?     69

Our First Move Is Toward the Eastern Orthodox Churches     76

Part Two: Baptism in the Scriptures and in the Ancient Church

Introduction: The Origins of Baptism     93

Baptism Was a Pagan and Religious Rite     95

Christ Redeems What Is Pagan and Makes It Holy     97

Scripture and the Church: A Unified Teaching     99

Baptism as Taught in CurrentChurch Teaching      175

Conclusion: A Few Comments and Observations     179

Part Three: The Eucharist in the Scriptures and in the AncientChurch

The Eucharist as Taught in Scripture     192

The Eucharist in CurrentChurch Teaching     255

The Real Presence: A History of the Resistance     261

Conclusion: A Few Comments and Observations     270